This page lists some of the available sources of information about Musselburgh and Inveresk, mostly before 1900, and in particular, records that are held in the National Records of Scotland in Edinburgh, where many of the records are open to the public at no charge.

Indexes and actual records for the Old Parish Registers, Statutory Registers of Births, Marriages & Deaths and Censuses are available online, following registration and the purchase of credits, at the official web-site, ScotlandsPeople. The statutory records of births can be seen at that site from 1855 up to 100 years ago; of marriages, from 1855 up to 75 years ago; for deaths, from 1855 up to 50 years ago. More recent records can be ordered.

The parish of Inveresk lies within the area covered by the Lothians Family History Society.

Note that although the parish of Inveresk lies within the county of Midlothian for historical purposes, since 1974 it has been within the area administered by East Lothian Council. So information about the area's history - archives, local history collections and museum collections - is to be found in Haddington, at the new John Gray Centre.

General descriptions of the state of the parish at different times

Maps of Inveresk and Musselburgh

There are no Ordnance Survey maps before the 1850s.

A Plan of Edinburgh and Places adjacent by John Laurie, Geographer, 1766. (Includes the parish of Inveresk).

Town plan of Musselburgh in 1853

Town plan of Musselburgh in 1893

ScotlandsPlaces: Inveresk - an extensive collection of photographs, maps and records 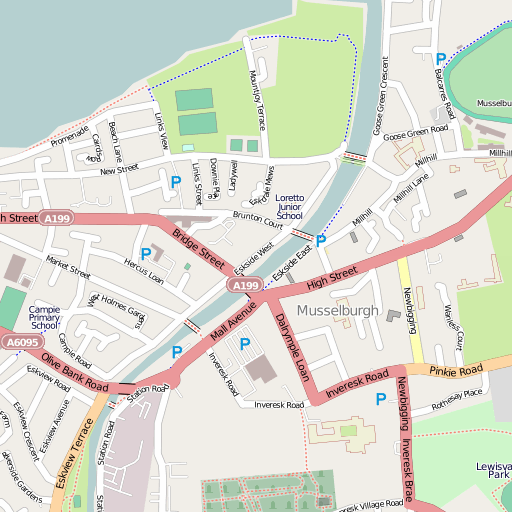 Dedicated to St Michael, the church is located in Inveresk village, outwith the burgh, at national grid ref. NT344721, at the site of a Roman fort. The present church was opened in 1806, to replace the previous small church, which could no longer accommodate the growing congregation. The old church incorporated materials of Roman date. It was 102 feet by 24 feet internally, with 2 aisles added on each side. These aisles were built by individuals for their family burials after burials within churches were banned in 1590; from the extant burial records, they were the Carberrie aisle, Stoneyhill aisle, Whitehill aisle and Mr Cout's (Colt's) aisle.

Engraving of Inveresk Kirk in 1547

Photo of the kirk at Geograph

Architectural details are given at British listed buildings.

Assistant ministers of the parish

Other ministers in the parish

The Burgher chapel, built ca 1768, was in Bridge Street, west of the River Esk.

The Relief kirk, built 1783, was on the south side of Millhill, towards the west end. The building is now St Andrews Church of Scotland.

At the West Port, south side of Musselburgh High Street, facing the New Bridge over the River Esk

The Congregational Chapel is on the north side of Fisherrow High Street, east of its junction with Bridge Street.

Until 1785, episcopalians met in Sharp's Land (now 8 Pinkie Road). An Episcopal chapel was built in 1785 on the north side of Millhill, towards its east end. The congregation later moved to the present church (St Peter's, by Paterson & Shiells, Edr) on the south side of Musselburgh High Street, at the East Port, the old chapel becoming a school.

All known inscriptions in the kirkyard are in R. Torrance (ed.), North-East Midlothian Monumental Inscriptions, Scottish Genealogy Soc., Edinburgh, 2000, ISBN 0-901061-88-3. It would have been nice to have been able to report that this was an accurate record (e.g. William Aitchison of Drummore b. 1753, d. 1939). The editing is woefully inadequate. Parts of some inscriptions are in square brackets, but no explanation is offered for that. We are told that some stones have been renewed and have less detail than the originals, but we are not told which stones they are. The original transcriber (Cramer) is said to have combined inscriptions from separate stones, where they appeared to relate to the same family; why is there no indication of where this has occurred, or why have the inscriptions not been separated again before publication?

The dates are the earliest mentions of the stones (or railings in some cases). Some of the entries below undoubtedly refer to the same stones. A "through stone" is a horizontal stone. Date format is dd.mm.17yy. The given names "Patrick" & "Peter" were used interchangably at this time. Very few of these stones can now be identified.

The modern cemetery is immediately west of Inveresk Churchyard and is being steadily expanded westwards over the site of the Roman fort.

The registers of burials and burial lair plans for Inveresk Cemetery are held at the Registration Office, Brunton Hall, Musselburgh (Tel 0131 653 5225/5226). See East Lothian Council: Paying for the burial.

I am not aware of any listing of the monuments in the modern cemetery.

Inveresk Cemetery - and further pages accessible from there

Distribution of the population in Nov./Dec. 1792

Images of the original records for Inveresk:

Images of the original records for Inveresk, accessible only on payment of subscription:

Lists of inhabitants of the parish

Nos 1-5 were drawn up by the kirk session to provide the names of children to be examined in their catechism, and were probably used by Dr Alexander Webster in computing the total population of Scotland in 1755.

The 1881 census is also available on CD-ROM, but be warned that numerous inhabitants of Inveresk on the CD-ROM are incorrectly listed as having been born in "Middlesex, England" instead of "Midlothian, Scotland".

579 residents listed in the Musselburgh section of the Edinburgh & Leith Post Office Directory for 1842/43 are available here (surnames A-K) and here (surnames L-Y).

Directories covering Edinburgh, Leith and Midlothian, including Musselburgh and Inveresk for other years are available in book form. Many are now online, at http://www.archive.org, e.g.:

Arms & Seal of the Burgh of Musselburgh

Coat of arms & common seal of the Burgh of Musselburgh

Provosts of Musselburgh from 1833 (incomplete; order subject to correction)

Musselburgh belonged anciently to the Abbey of Dunfermline in Fife, the lands of Inveresk being part of that abbey's `Regality of Dunfermline'. An attempt in 1632 to raise its status to that of `Royal Burgh' was squashed by Edinburgh Town Council, who feared competition on their doorstep. This prevented Musselburgh from engaging in foreign trade.

Until the reforms of 1833, there were 18 councillors, including two bailies (magistrates). Two councillors retired each year at Michaelmas, 29 September, & two new councillors were elected. Of the total of 18, 10 had to reside within the burgh, 6 in Fisherrow, Bridgend or Marketgate, and 2 in Newbigging, Millhill or at the salt pans.

[Source: Paterson's book. Paterson is referring to a time, perhaps as early as 1700, when the 'burgh' included nothing more than the houses in Musselburgh High Street. The limits of the burgh were steadily expanded, as is clear from Population in 1792.]

Musselburgh burgess tickets in the NRS

Inveresk men admitted as burgesses of St Andrews in Fife

Manuscripts in the National Library of Scotland, Edinburgh

Miscellaneous items in the National Records of Scotland, Edinburgh

Miscellaneous items in the National Library of Scotland, Edinburgh

There was a pottery at Westpans [west with respect to Prestonpans] by 1738, when a Robert Peet (or Pate) sought funds to establish himself in business. James Thomson held a tack (lease) there in 1750. Samuel Lammas held the lease from 1754. Thereafter, Anthony Hilcoat, Adam Cubie, Thomas Shelley, William Littler (in 1764), William Dallaway and William Littler - all Englishmen except Cubie - were active there. The pottery closed around 1777.

There was also a pottery in Newbigging from 1800 to 1930. It was initially the property of a William Reid; ownership passed to Dr William Affleck Gray in 1889 (though he had run the pottery since 1868) and, later, his sons. Mrs Marion Richardson bought the pottery in 1926, but it was abandoned by 1930 and she sold it in 1932.

The following militia regiments were at Musselburgh in the period 1803-14:

Some of the militia stationed at Musselburgh were moved to guard French prisoners at Penicuik MLN after 27.4.1805.

Engraving of Inveresk Kirk in 1547

Place-names in the Parish

Just a list at present. I hope to add details soon. If you know of other pre-1900 place-names and their locations, please let me know.

Records of the Poor

National Records of Scotland, ref. NRS DC5. These are records for the years 1804 to 1975 for Musselburgh District Council and its predecessors, including records of the parochial board.

Some details of Inveresk Combination Poorhouse, including a map and photographs of the building, are available here.

The registers of sasines (changes of ownership of land) for the Sheriffdom of Edinburgh (which includes Inveresk) can be seen in person in the Historical Search Room at the National Records of Scotland, Edinburgh.

Indexes to all extant pre-1926 testamentary records (wills & inventories of moveable property) can be searched free of charge at ScotlandsPeople. Digital (and paper) copies of the documents can be purchased at that site.

Note that hardly any of these testaments before 1800 include the will of the deceased, being largely accounts of the 'goods and gear' of the deceased and of debts owed and owing. Some of them mention relatives.

16th century testaments of people with Inveresk connexions
An almost complete list of those for whom there are testaments and who were resident in Inveresk.